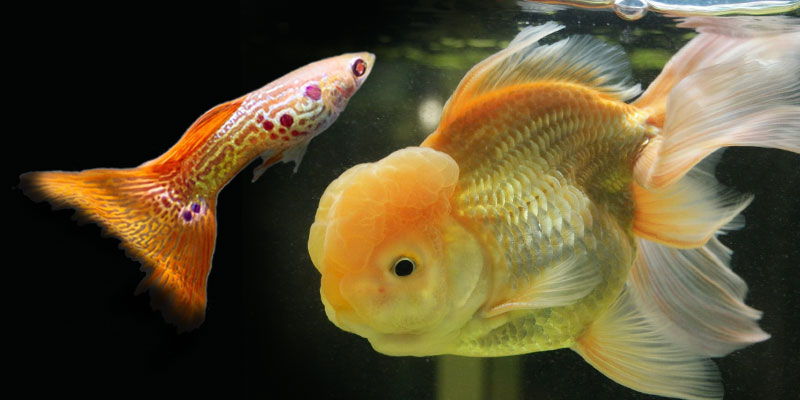 Goldfish are one of the most common fish among aquarists. Goldfish are also hardy and are not extreme with their environmental demands. Also, goldfish are generally not aggressive; therefore, they can cope with a wide variety of tank mates provided they are larger than the mouth of goldfish.

However, it is essential to ensure that the tank mates that you select for your goldfish. There are specific requirements that you must consider, like similar environmental demands, aggressiveness, size, diet,  as well as feeding demands.

Finding the fish that can comfortably live with goldfish in the same tank without causing harm to each other can be quite tricky. Goldfish on their own have no problems because they are generally not aggressive and can cope with fish of similar behavior.

Likewise, goldfish have some tank conditions that favor their growth and promote their healthy living. The health of the goldfish can be compromised if you alter these conditions. Therefore, if you intend to ensure healthy coexistence, you should only keep them with fish that have almost the same environmental demand.

Moreover, goldfish are cold-water fish; therefore, fish that will live successfully with them must be fish that can thrive in low-temperature environments.

Also, goldfish are peaceful species that mind their business without disturbing each other. Consequently, they can only live with fish that won’t disrupt their existence too. Avoid keeping them with aggressive fish such as betas, cichlids, as well as tetras.

You should also note that goldfish are greedy eaters; they will practically eat anything that fits into their mouths in their tank. Consequently, you should avoid keeping goldfish with smaller fish that can fit into their mouth. They can even feed on their fry.

Another critical factor that can affect the life and health of goldfish is the population of the tank members. Goldfish find it hard to cope in overcrowded tanks; they love adequate space to accommodate their size and the size of their tank mates.

Overall, size, tank conditions, environmental demands, aggressiveness, as well as feeding demands, are essential requirements you must consider before selecting compatible tank mates for your goldfish.

Goldfish have much peculiar behavior that can determine the number and type of fish that can cope with them. They can only deal with fish that can put up with this behavior without interfering with their lives.

Likewise, big goldfish chasing smaller fish can mean bullying even though goldfish do not usually bully, certain conditions like stress, overcrowded tanks, and when they are starving.

Goldfish also prefer large tanks because they love to rest at the base of the tank to relax after a series of activities. Therefore, they might find it hard to cope with fish that will interrupt their resting period. Ick fish also prefer to stay at the base of the aquarium; therefore, any more disturbances can further complicate their health issues.

Another typical behavior of goldfish is foraging which involves digging up aquatic plants, ornaments, as well as gravel at the bottom of the tank. This behavior is generally standard for goldfish and most often results in nibbling behavior to the plant. However, you don’t have to worry about foraging behavior because it is their normal behavior and does not pose any harm to them or any of their suitable tank mates.

Another significant behavior of goldfish is their non-fussy feeding behavior. Goldfish will eat almost anything they find in their tank that fits into their mouth. Consequently, aquarists need to regulate the feeding of goldfish. You shouldn’t feed them as much as they eat.

Do Goldfish Kill Other Fishes?

Naturally, goldfish are not aggressive, and they don’t exhibit any act of predation. Although there are a few occasions where goldfish exhibit certain aggressive behaviors, but they usually don’t.  Factors like change in environment, stress, as well as extreme hunger.

Goldfish can also gang up against sick or stressed members because they perceive them as weak. They do this to prevent further calamity and prevent similar conditions from spreading among other members of the community.

You can, however, prevent this condition by quarantining sick goldfish and separating the fish from other members of the tank.  You should also avoid overcrowding in their tank because it can give them the impression that they have to battle for living, consequently making them more aggressive.

However, on a typical day and under suitable conditions, goldfish are generally peaceful and wouldn’t pose any form of harm to fish of similar size or bigger fish. However, they can prey on smaller fish and fry, munch them and consume them as food.

Goldfish can cope with several types of fish in the same tank because of their general peaceful behavior. They can deal with fish of similar calm attitude as long as they have identical environmental demands and tank conditions. Likewise, they must be of a relatable size to prevent them from being preyed upon by goldfish.

Read More: Real Aquatics: Tranquility That Flows Through Your Soul